The grand plan was to circumnavigate the world... Kinabalu was delivered new to her current owners in Scotland in 2010. The hull No 308, was one of the last built in this series. The owners visited the Elan factory to see the hull before the deck was attached, confirming their excitement that the construction of the hull and overall workmanship would meet their high expectations.

The owners planned to cruise two up, in a yacht that would combine performance with sufficient, comfortable accommodation for family and friends to join them for extended periods. Since taking delivery of their new Elan Impression 434, they have fulfilled the dream of discovering the world!

Travels began with a shake down cruise around Scotland visiting all of the renowned Scotch Whisky distilleries... (hic) before setting sail for Spain, Portugal and the Canary Islands.

Kinabalu joined the 2010 ARC, crossing the Atlantic and spending some blissful recovery time in the Caribbean before cruising up and down the east coast of the United States. Following two seasons in the Med, Kinabalu recrossed the Atlantic, transited the Panama Canal and sailed into the Pacific.

They really stretched her legs across the Pacific, traversing the well-sailed East to West route, however unlike most others, veering north when reaching New Zealand, finally coming to rest in Asia. Several seasons were spent cruising around Asia, with a spot of racing in events such as the King's Cup sporting an international crew.

With the decision made to finally settle in Tasmania, Kinabalu was sailed to and imported into Australia, December 2018 where she now leads a more leisurely life in the picturesque D'Entrecasteaux Channel south of Hobart. Just to keep her on her toes, the owners have made the trip around south to Port Davey and have successfully competed in the recent Port Cygnet Regatta.

After 10 years and many safe sea miles, the owners have decided to 'Swallow the Anchor' and let a new owner enjoy their pride & joy, as Kinabalu has many more exciting sea miles left in her yet. As with everything we value, Kinabalu is in 'as-new' condition having been maintained regardless of cost - offering a new owner the opportunity to live aboard whilst coastal or bluewater cruising without limits.

For more information or to arrange an inspection on this one of kind yacht, call Jeff on +61 414 236 337 or email: jeff@yachtsalesaustralia.com

Yachts and Boats for sale data feed by Yachthub.com 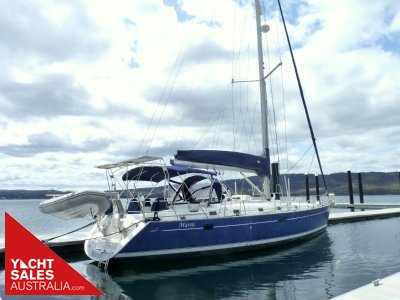